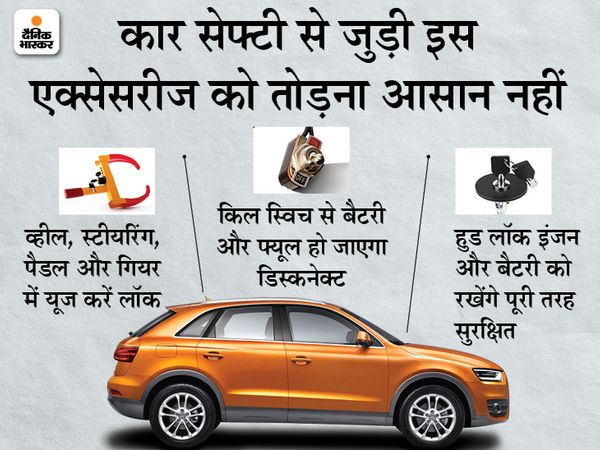 Now many such features are coming in the car which protect it from theft. However, there is no guarantee that the car will not be stolen. Actually, a similar case has come up in Indore. Here the Hyundai Creta car of a woman named Varuni Paliwal (21) was hacked and stolen by thieves. Varuni says that his car was equipped with many high security features. In such a situation, we are telling about some such gadgets and accessories that will keep the car safe from theft.

1. Wheel Lock: Starting From Rs.1000
Parking police often use this lock. They are made of metal and are very strong, it is not so easy to break or cut. Its plus point is that it is visible from outside the car. In such a situation, if a thief is thinking of stealing your car, then maybe change his mind. It is easily available online as well as offline.

2. Steering Wheel Lock: Starting At Rs.600
These locks are available in a variety of designs but all work to prevent the steering from turning. Some new steering locks also get the feature of alarm, as soon as someone tries to open them, the alarm will sound. There are also some locks available in the market that lock the steering as well as the brake or accelerator pedal.

3. Paddle Lock: Starting at Rs.700/-
Like the steering wheel, the pedal lock is also used to lock the accelerator and brakes. If it is installed in the car, then no thief will be able to steal your car easily. Any one of these locks can also be used or more than one lock can be used for more security for more safety.

4. Hood Lock: Starting At Rs.500
In many cases, when the thief is unable to steal the vehicle, he targets the engine or battery. In such a situation, hood locks can prove to be very useful. If the vehicle has a hood lock, then the thief will not be able to open the hood of the vehicle even after making all efforts, due to which the battery, engine and other parts of the vehicle will be safe.

5. Gear Shift Lock: Starting From Rs.500
A gear shift lock can also be used to protect the vehicle from theft. This locks the gear shifter completely. In such a situation, even if the thief gets into the car and starts the engine, then the vehicle will not be able to move forward. Gear shift locks are very strong, they are easy to break and difficult to cut.

6. Kill Switch: Starting at Rs.2000
This is a small device, also known as a battery disconnect switch. It has to be installed in such a place in the car where it is not easily visible. This switch connects directly to the vehicle’s battery or fuel pump. If you turn this switch off while the vehicle is parked, the vehicle’s battery or fuel pump is disconnected (depending on what the switch is connected to). Now if no one will be able to start your car.

7. GPS Tracker: Starting From Rs.1000
This is a very old device. With its help, it becomes easy to find a stolen vehicle. With its help, you can trace the live location of the vehicle. Also, some features of the vehicle can also be controlled, such as the engine can be turned on and off with the help of the app. If the car has been given to someone and you want the vehicle to remain in a certain area and not go outside it, then you can create an imaginary geo boundary, by doing this you will be called immediately as soon as the vehicle goes outside that boundary. But you will get an alert. With this, the live location-speed-running and mileage of the vehicle can also be tracked.

8. Video Monitor: Starting at Rs.7000
It is not a dedicated anti-theft device nor is it designed to prevent vehicle theft. It was made to take care of children, but many people are taking care of their car with it. This product comes with a camera, which has to be installed inside the vehicle and a display is available, which you can carry with you. In this display, you can watch the video inside the vehicle, click photos, it also gets night vision for better viewing at night. It is sound sensitive, as soon as there is any sound inside the vehicle, it will activate immediately and notify the user.

9. Engine Immobilizer: Starting at Rs.1500
Although engine immobilizer is available in many vehicles from the company itself, but still this feature is not available in many vehicles. If the vehicle has an engine immobilizer, then the vehicle will not start with each key, it will start only with the original key. Even if the thief gets a duplicate key made, he will not be able to start the car. There is a chip in the original key of the car, which sends a signal to the ECU (Engine Control Unit) in the vehicle, without this signal the car will not start at all.

10. Central Lock System: Starting From Rs.500
At this time most of the cars are coming fitted with the central locking system, but even if your car does not have it, then it can be installed from outside also. Although it has been seen in many cases that even after having a central locking system, the vehicle is stolen, so it cannot be trusted 100%, but it is effective to a great extent. Its fitting is also done at the company’s showroom.

About Price: The price of the gadgets and accessories shown in the news is taken from the online platform. Their price may be different on different e-commerce platforms.

There is more news…