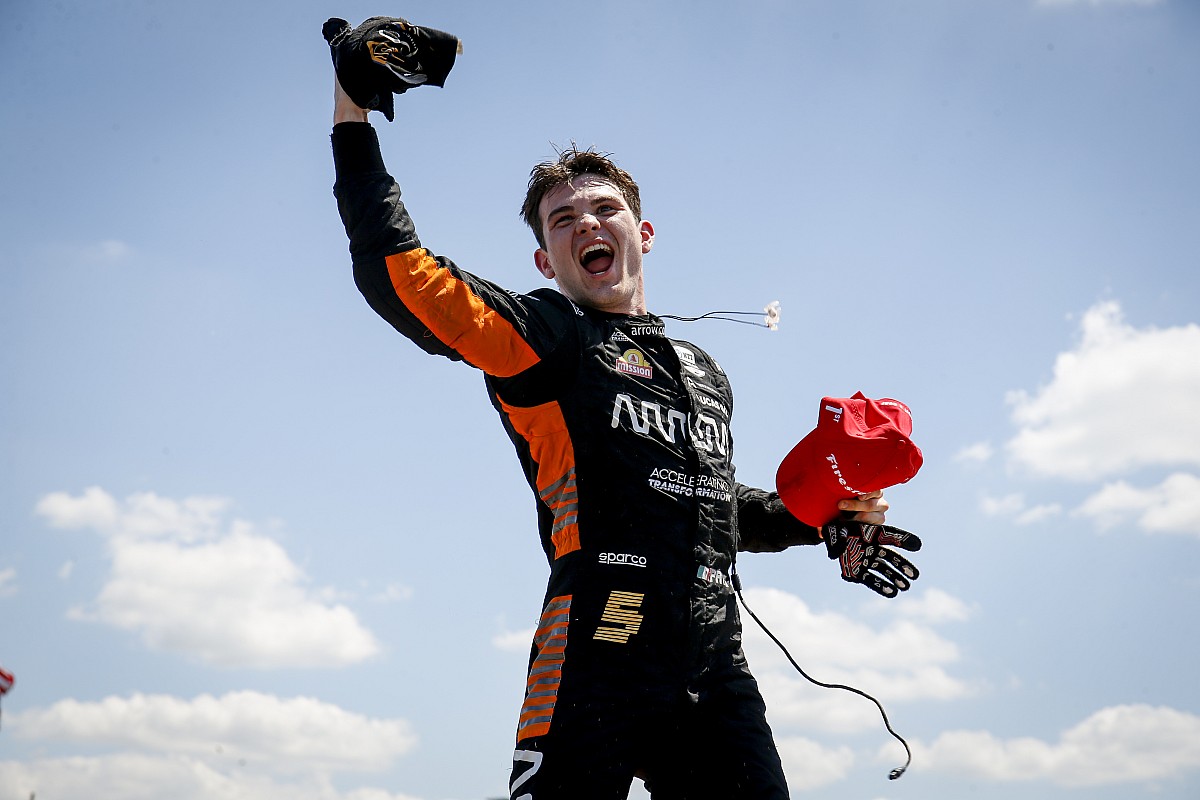 Newgarden made a strong start to hold off Colton Herta who had his mirrors full of Rinus VeeKay, but held on, while behind them Alexander Rossi dived up the inside of Romain Grosjean who had Scott Dixon on his outside. Rossi and Dixon pincered Grosjean, the Ganassi driver bounced off the Dale Coyne Racing with RWR-Honda which lost momentum, but Dixon held his slide, and Rossi got through although sustained front wing damage.

However, down at Turn 3, Max Chilton launched his Carlin off the back of James Hinchcliffe and lost his front wing and required bumpstarting.

This was the ideal opportunity for those who started on the fragile reds, to get off them under caution. These included VeeKay, Grosjean (who had suffered some nose damage), Sato, Bourdais, Ericsson, Harvey, Askew and Chilton.

The restart on Lap 4 would see Newgarden on Primaries ahead of the red-tired Herta, Palou, Rossi, Rahal, Ed Jones, Dixon, Daly, Ferrucci and Pagenaud.

At the restart on Lap 4, Newgarden held position, but Pato O’Ward inserted himself into the Top 10 with a typically brave dive up the inside of Pagenaud at Turn 1.

Newgarden swiftly pulled a gap on his alternate-tired opposition – 3sec lead by Lap 7, 4sec by Lap 9 – as they tried to nurse their tires to reach the fuel window. Conor Daly seemed to try a hybrid strategy, pitting his ECR-Chevy on Lap 10.

Nearer the front, Rahal passed Rossi for fourth who was struggling with his injured front wing. The artificially slow pace of the cars stacking up behind him allowed Dixon to nip past Jones into sixth. Into Turn 3 on Lap 14, Dixon made his pass on Rossi, and right behind him, Ferrucci demoted Jones to eighth. Such was Jones’ loss of momentum he fell back behind O’Ward and Pagenaud too.

VeeKay passed yesterday’s winner Ericsson, but elbowed him into the wall at the entry of Turn 6 and gave himself a puncture.

Rossi’s troubles continued, falling behind Ferrucci and O’Ward before giving up the unequal struggle on Lap 17 and pitting for black tires and a new front wing. Teammate Ryan Hunter-Reay also pitted from 11th, while next time by Jones stopped, promoting Power (blacks) and Scott McLaughlin (reds) into the Top 10. Their teammate Newgarden, meanwhile, was reveling in the pace of his Penske up front leading Herta by 14sec at this stage.

Dixon and Grosjean stopped on Lap 19, and when Dalton Kellett ground to a halt on the exit of pit road, several teams suspected the full-course caution might fly.

So in came Newgarden, Herta, Palou and Rahal. In fact, the AJ Foyt Racing team were able to pull Kellett’s car clear, and so Newgarden had shortened a primary tire stint for no reason. That could put him at a major disadvantage later in the race when he would need to run a longer stint on the reds.

His lead was down to 3.8sec, as the new second place man was teammate Power, the only driver yet to stop, having looked after his primaries while running in traffic, and now laying down 1min16sec laps. He brought the #12 Penske-Chevy in on Lap 27, switching to another set of black tires, and emerging in front of O’Ward who passed him on his out lap, but Power had made a net gain of 13 places from his grid slot of 20th. On the downside, like Newgarden, he would still have to take on a set of reds before the end.

Grosjean got a drive-through penalty for spinning Jack Harvey’s Meyer Shank Racing-Honda and giving it a right-rear puncture. Harvey thus ran a lap down and Grosjean very nearly so.

At the halfway point of the 70-lap race, Newgarden was still 10sec ahead of Herta, who had a 5sec margin over Palou, followed by Rahal, Dixon, O’Ward, Power, Ferrucci, Hunter-Reay and Rinus VeeKay, the top 10 covered by 45sec. However, Hunter-Reay, Pagenaud and Ericsson would push VeeKay down to 12th, before yesterday’s runner-up ducked into the pits on Lap 41, after a huge fishtail moment as Sato tried to pass him.

Herta had shaved his deficit to Newgarden to 5.5sec on Lap 45, by the time Herta pitted for the final time to take on a fresh set of primary tires. Next time by, Newgarden stopped for used reds, but Herta was on a charge, and the two-time champion was going to need to nurse his reds. The gap was down to 3sec with 23 laps to go. Behind them ran Power, who would soon need to stop for his reds, while Palou who had made his final stop for blacks ran fourth 2.4sec ahead of Rahal who had a 13sec margin over Dixon – now on reds and treating them carefully – O’Ward, Ericsson, Pagenaud and Ferrucci.

Herta set his fastest lap of the race so far on Lap 50, as he closed the gap to Newgarden to 1.3sec. That gap was halved, next time by, at the same time Power stopped for his fresh reds, and came out in seventh, behind Dixon and O’Ward.

Out came the caution on Lap 54, as Jimmie Johnson spun through Turn 1 and into Turn 2, and stalled it, requiring a bump start.

So the restart on Lap 58 saw Newgarden on reds leading Herta, Palou and Rahal on blacks, Dixon on reds, O’Ward on blacks, Power on reds, and Ericsson, Pagenaud and Hunter-Reay completing the Top 10 on blacks.

O’Ward passed Dixon into Turn 1 to grab fifth place, while Newgarden’s reds got up to temperature quicker and sprinted to a 1.1sec lead over Herta and Palou. However, the yellows flew again within that restart lap as Grosjean spun and his left-front brake caught fire. The Frenchman leapt out of the car, snatched a fire extinguisher from a marshal and was starting to try and put out the flames, having to be heavily dissuaded by the AMR Safety Team to stay clear and let the pros handle it.

The next restart came with seven laps to go, and again O’Ward nailed a pass at Turn 1, slicing inside Rahal, and maintained his momentum to move past Palou down the back straight, before moving right onto the tail of Herta. The Arrow McLaren SP-Chevrolet then nailed Herta with six laps to go in a very close but perfect pass at Turn 6 and start hunting down Newgarden, which he did in short order.

Newgarden’s car was looking leery through the turns but two-tenths behind him, O’Ward looked composed – and now Herta had caught back up with the pair of them. With two to go at Turn 3, Herta had to alter his attempted pass on the pair of them and skidded long, while O’Ward stayed right on Newgarden’s twitching tail through Turn 6 and outdragging him – with some side impacts – down into Turn 7 and into the lead.

Behind him, Palou had taken advantage of Herta’s lost momentum but the Ganassi driver couldn’t find a way around the Penske and settled for third, defending hard from Herta.

Rahal stayed fifth for RLL-Honda, with Power passing Dixon after the last restart to claim sixth.

It was the ninth win for the Arrow McLaren SP team, the second of O’Ward’s career and it puts the Mexican into the lead of the championship by one point ahead of Palou.