India vs England (IND vs ENG) 4th Test, Day 5 Highlights: India won the fourth Test against England by 157 runs to take a 2-1 lead in the five-match series after the home side collapsed to 210 all out on the final day at the Oval on Monday.
Set a record 368 to win, England went from 100-0 midway through the first session to getting bowled out 40 minutes after Tea, sparking wild celebrations among India’s players and fans inside the south London venue.
Avoiding defeat in the final test at Old Trafford starting on Friday would see India win a test series in England for just the fourth time, after 1971, 1986, and 2007. Scroll down for full highlights –
“I wanted to be on the field as much as I could. That hundred was special. Virat just mentioned the effort from the batsmen, and as a unit it was really important. Kept my head down and batted the situation and once we got the lead, we wanted to put pressure on the opposition.”
‘Well, I think the best thing about both the games has been the character the team has showed. We are not looking to survive in this game, we are here to win. Really proud of the character the team has showed. It’s quite relative what you call flat. The conditions were hot and we knew were in with an opportunity when Jadeja was bowling in the rough. The bowlers were good with the reverse swing today. We believed we could get all 10 wickets, we had the belief. What Shardul has done has to be remembered for a long time.’
What a Test Match …
Something which is most beautiful about this format is the way it allows you to make a “comeback”.
From 7/127 on Day 1 to a win by 157 runs, this just shows the beauty of our game.
Brilliant piece of captaincy from @imVkohli too ❤
pic.twitter.com/RZasO8ZVxW
A Test where the balance swung both ways almost every session but India showed why they’re one of the best Test teams in the world. The first tour with two Test wins in England since 1986. First win at The Oval since 1971.
India two Test victories at the Oval, London came…
50 years, 13 days apart!
24 Aug 1971: India won by 4 wickets
6 Sep 2021: India won by 157 runs#INDvsEND #IndvEng#ENGvIND #EngvsInd
The end of another brilliant Test match & it’s India celebrating after a match that swung one way then the other.

Once India got the ball reversing today though, it was one-way traffic & they go into the fifth & final Test with a lead! #ENGvIND🏴󠁧󠁢󠁥󠁮󠁧󠁿🇮🇳 pic.twitter.com/Dt67N1aWup
Anderson edges one and reviews but it’s gone! What an incredible performance and bouncebackability from India, specially after an innings defeat in the last Test. Eyeing a test series win after 14 years in England. Kudos to the Indian pace battery of Burmah and company.
If India win here – not the biggest ‘if’ – it will be the first time they have won a Test after losing the toss, being put in to bat, and being bowled out for under 200. Previously: 3 draws, 13 defeats.
Bumrah to Anderson and the duel is once again reignited as the Indian seamer digs it short but Anderson rises on his toes and fends it away. Matter of time now.
WICKET! India are one away now. Umesh Yadav gets another and Overton has to go, with a sore elbow too. It takes just 4 deliveries with the new ball for Umesh to bowl Overton – India one away! ENG- 202/9 |  England need 166 Runs India need 1 Wicket.
India have finally opted to take the second new ball. The older one was helping them quite a bit with reverse swing. The ‘fighting back spirit’ from any situation in Indian team is just great! Time for Jadeja perhaps before the roll of the dice with the new ball?
Images like this reinforce why this format is the ultimate. Love the celebration from the little girl as well. Makes my heart ♥️ melt knowing that the next generation is falling in love with Test cricket. #ENGvIND pic.twitter.com/AnM9wi15h2
Welcome back for the final session. Ollie Robinson, right-handed bat, comes to the crease. He plays out a quiet over but is hit by a bouncer from Umesh Yadav in the last over.
Chris Woakes finds the man at midwicket and Umesh Yadav joins the party! India are now just two wickets away from a win. The leg trap worked pretty well, a brilliant setup from Kohli, Umesh is good at using an old ball. It is Tea Time at the Oval |  ENG- 193/8
The LORD striketh gold! 💥
Shardul bowls one in the corridor outside off and Root chops it on! 🇮🇳 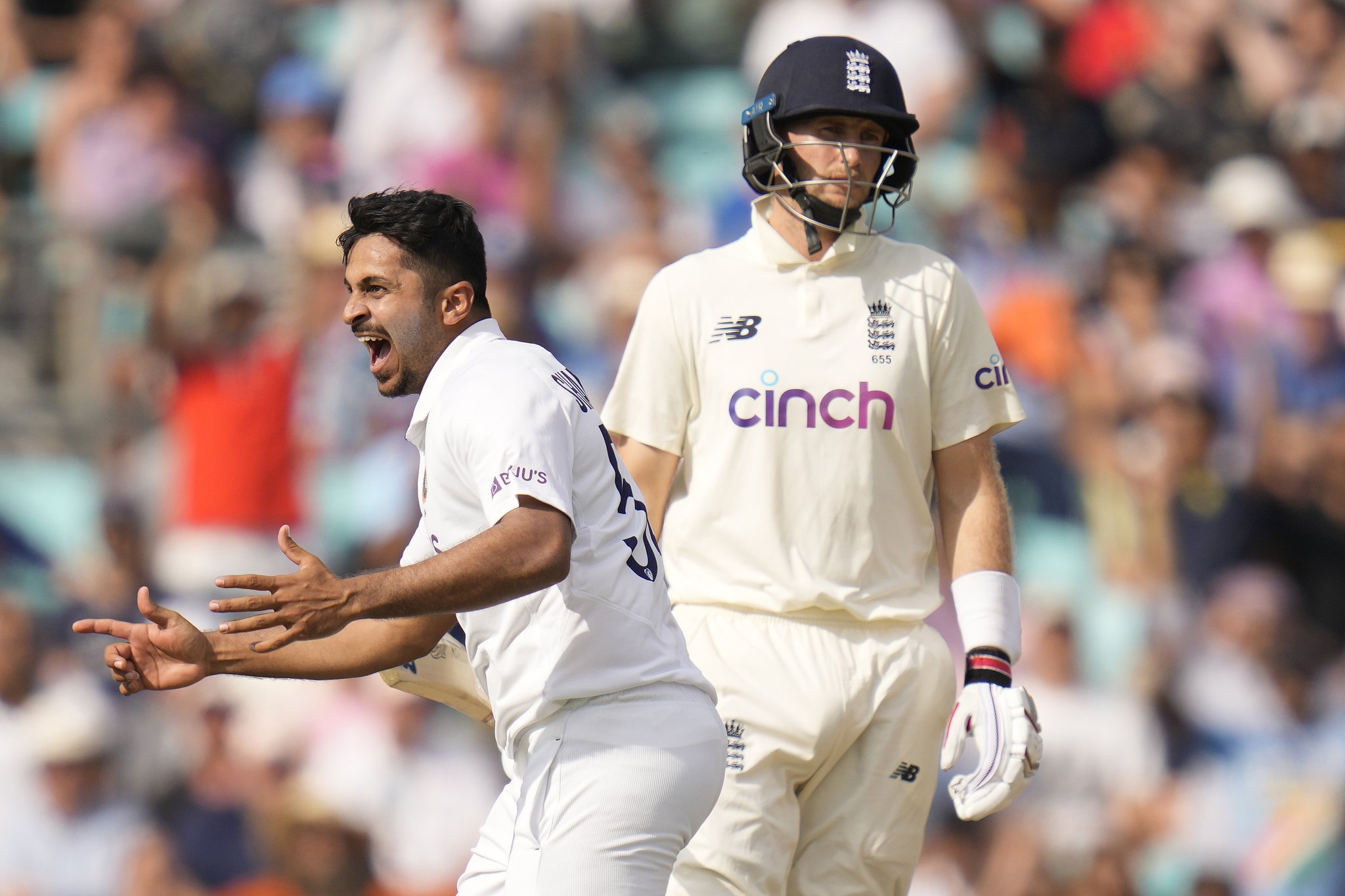 Praise the Lord!!! Root chops it on and is unhappy with himself. Was playing with an angled bat and he is gone for 36(78). Kohli is running around in joy, absolute scenes at the Oval.
FOUR, nicely played, tad too full and wide of off, Root leans into the drive and places it in front of square on the off-side, long chase for Rahane, but one in vain.
Here is the damage done so far by Bumrah and the bowlers-
India have taken four wickets since lunch. India’s Rohit Sharma celebrates scoring a century with teammate Cheteshwar Pujara during the fourth Test against England. (AP)
In his first overseas Test hundred, Rohit Sharma showed dignified restraint. A raised bat to acknowledge the applause, a handshake with Cheteshwar Pujara and a smile, which more than anything else had the relief of breaking the jinx. He has been playing Test cricket since 2013. Eight years and 42 Test matches later, the monkey was finally off his back.
Carried by his century and Pujara’s effervescent 61, the tourists mounted a fightback and two wickets in an over notwithstanding, they finished the day on 270/3, when bad light stopped play. With two days to go, India lead by 171 runs and the ball has started to turn off the footmarks. (READ MORE)

Pakistanis abduct Hindu girls whenever they lose a cricket match to India: What Delhi’s Adarsh Nagar Hindu refugee revealed to...

Shreyas Iyer is the man of the moment in Indian cricket as his efforts with the bat have put India...